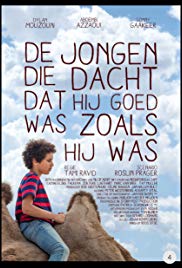 | Kort |
| Nederland |
2013 The boy who thought he was good enough the way he was is a short poetical children's film about eleven year old Latif who is not quite who his father expects him to be. Latif is gifted with a great feeling for rhythm. Even everyday life and ordinary objects feed him with inspiration for new musical compositions; the sound of a falling knife, the ticking of a clock, the small talk at breakfast. Opposed to his concentration for making music, Latif has a hard time concentrating at school. His father doesn't understand the problems Latif has at school and thinks his son spends too many hours in his room, making music. When the tension between father and son increases, Latif flees in his music and finds himself in his fantasy world, where there is no time and space. Only the nature and his friend the camel, where he finds peace resting against its warm flank. As his results at school get worse his father's disappointment grows. A visit to a children's psychiatrist offers a solution; there are pills against Latif's concentration problems. But Latif doesn't want these pills. Isn't he good enough the way he is?
Acteurs in deze film